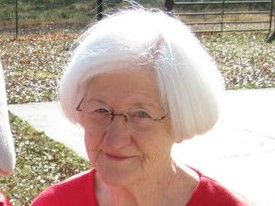 Service will be held at McRae Chapel on Saturday, December 23, 2017 at one o’clock p.m. Bro. Keith Dodd and Dr. Aaron Johnson will be officiating. Burial will follow in the Old Clear Creek cemetery. Visitation will be on Saturday from eleven o’clock a.m. until funeral time at the funeral home.

Mrs. Howard was born in Alabama on January 15, 1932 to Luther Lee & Lizzie Daniel. She was a retired seamstress with H.D. Lee.

Family request in lieu of flowers donations may be made to the Benevolence Fund of First Baptist Church Boaz P.O. Box 337, Boaz, Alabama  35957.

To order memorial trees or send flowers to the family in memory of Ruth Howard, please visit our flower store.