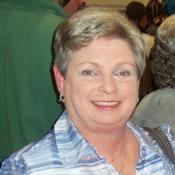 Mrs. Mary McCray Henry, 61, of Williams Road, Albertville, passed away peacefully and surrounded by family at her home Saturday, May 12, 2012.

Service will be held Tuesday, May 15, 2012 at 2:00 p.m. at St. Paul United Methodist Church with Bro. Mike Spivey and Bro. Jeff Bayne officiating. Interment will follow in Beulah Cemetery. Visitation will be on Monday evening from 6 - 8 at McRae Funeral Home. McRae Funeral Home, Boaz, Alabama in charge of arrangements.

She grew up in Uniontown, but lived her adult life on Sand Mountain. She received her undergraduate and graduate degrees from the University of Alabama. Mary was a retired school teacher, having taught high school biology for 25 years and also worked some as a school administrator. She finished her education career at Boaz High School. After her retirement from the Marshall County school system, she worked alongside her husband in their jewelry store, J. Leonard Henry & Co. in Albertville. Mary was a caretaker at heart, always willing to help anyone in need. She enjoyed teaching her students, some of whom took three years of classes with her. She took pride being a teacher who cared about her students. While being a stern educator, she was fair and enjoyed helping prepare her students to be successful not only academically, but also good citizens. She took great satisfaction when students returned from college and told her how prepared they were for advanced learning by having taken her classes. Her love for life and God's creations could be seen in how she cared for her beloved dogs and surrounded her home with beautiful flowers. She enjoyed spending time with her family, gardening and going to the beach. Mary was a member of St. Paul United Methodist Church in Boaz.

Mary had the best possible care at home thanks to Juanita Belvin, Dee Mace, Nicole Messer and Hospice of Marshall County (Jackie P., Shirley and Kerry).

To order memorial trees or send flowers to the family in memory of Mary Henry, please visit our flower store.