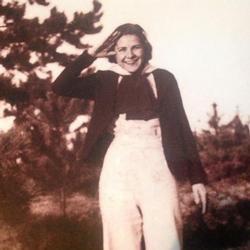 She was born in St. Louis, Missouri in 1914 to the parents of Major and Mrs. Harrison V. Pittman. Her father was a civil engineer with the U.S. War Department. Her mother and two sisters, Evelyn and Virginia, died in a tragic river accident when she was five years old.

Much of her early education was in a Catholic convent school in Springfield, Illinois. As a 1935 graduate of the University of Alabama, her classmates included football stars Don Hudson and Paul (Bear) Bryant. In 1936, she began her teaching career in Albertville. After marrying Martin L. (Jake) Owen in 1940, she moved to Boaz where she taught through 1976. After retirement, she led a large aerobics class for many years.

Mrs. Owen devoted her life to family, church, school, and community. As a physical education teacher, she was a pioneer in the early development of girls' athletics. She tirelessly gave of herself as a champion and defender of anyone who was troubled, alienated or disadvantaged. She was awarded the Birmingham-Post Herald Medallion for extra-curricular activities for youth in Alabama. She was a popular columnist for the Sand Mountain Reporter for many years; a member of the Twentieth Century Club; the Boaz Garden Club; Alpha Delta Pi Sorority; a past Boaz Citizen of the year and always available for any good cause.

As one of the first Catholics in Marshall County, she was a founding member of St. Williams Catholic Church and a life-long proponent of religious tolerance and understanding. She frequently visited other area churches and participated in their activities.

At the age of 92, she wrote her memoirs which were published as "The Road from Chilo".

She was preceded in death by her husband of 57 years Martin L. (Jake) Owen of Boaz.

The family would also like to express their gratitude to her caregivers for their dedicated service and compassion.

Services are Saturday, August 15, 2015 at 12:00 pm in the chapel of McRae Funeral Home with Father Tim Pfander officiating. Burial will follow in Hillcrest Cemetery. The family will receive friends on Friday night from 6:00 until 8:00 pm at the funeral home.

Family requests in lieu of flowers, memorials may be made to the Chapel of the Holy Cross in Albertville, Alabama or Julia Street Memorial Methodist Church in Boaz, Alabama.

To order memorial trees or send flowers to the family in memory of Marion Owen, please visit our flower store.