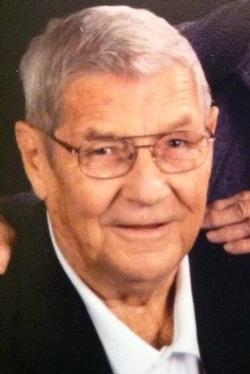 Service will be held Tuesday, July 29, 2014, at 3:00 p.m. at First Baptist Church Boaz. Bro. Aaron Johnson and Bro. Keith Dodd will be officiating with interment to follow in Hillcrest Cemetery. He will lie-in-State at the church from 2-3 on Tuesday. McRae Funeral Home, Boaz is in charge of the arrangements. Visitation will be Monday from 5 until 8 at First Baptist Church Boaz

Mr. Hunt was born in Albertville, Alabama on Sept. 18, 1931 to Joseph Carl & Ora Drucilla Wright Hunt. He retired as the owner of Hunt Wright Hardware after more than 50 years.

In lieu of flowers the family suggests donations to Legacy Foundation of First Bapt. Church Boaz.

To order memorial trees or send flowers to the family in memory of Joe Hunt, please visit our flower store.