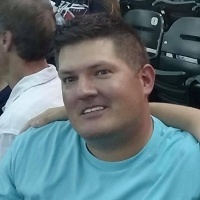 Ret. SSG Jeremy Brooks Puryear, 41, was called home to be with our Heavenly Father on June 19th, 2019.
Ret.SSG Puryear was born June 28th,1977 in Decatur, Alabama. He joined the United States Army in 1996 and retired in October 2016 after serving 20+ years. He was a war veteran serving tours in Bosnia, Iraq and Afghanistan.
Ret. SSG Puryear was a brave and dedicated Soldier, as well as a patient and loving husband and father. He met and married Dana Higginbotham in Fort Riley on June 24, 2000. He was a natural leader and was respected by his peers and Soldiers. In 2017, he began a new career serving Soldiers at the Olin E. Teague Veterans’ Medical Center.
He shared his love of Alabama Football with his son. He spent many weekends grilling and listening to music with family. Most of all he loved dachshunds and leaves behind his four beloved wiener dogs: Buster Brown, Freedom, Jack, and Astro.
He is survived by his wife Dana; his son, Jonathan Brooks; Father, Marion Brooks “Buddy” Puryear and his wife Linda. He is preceded in death by his mother Aleathea Raburn, and his grandparents.
A viewing will take place at Heritage Funeral Home on June 25, 4-7 p.m., followed by a memorial on June 26 at 11:00 a.m. The service will be officiated by his father Marion Brooks “Buddy” Puryear. He will be taken home and laid to rest at the Alabama National Cemetery in Montevallo, Alabama.  In lieu of flowers, you may choose to donate to the Diamond Dachshund Rescue of Texas at http://www.ddrtx.org.

To order memorial trees or send flowers to the family in memory of Jeremy Puryear, please visit our flower store.