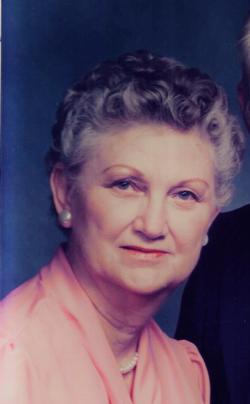 Service will be held at 3:00 p.m. on Sunday, January 1, 2017 at the McRae Funeral Home Chapel with burial ten o'clock p.m. on Monday, January 2, 2017 in Marshall Memorial Gardens. Bro. Tony Gunter and Bro. Ronald Lang will be officiating. Family will receive friends the day of the service from 1:00 p.m. until the time of service at funeral home. McRae Funeral Home is directing.

Frances was born in Jennings, LA. Her father ran a dredge in the swamps of Louisiana and as a young child she lived on a houseboat that traveled with the equipment. She later moved to Bryan, TX. She worked for the Texas Department of Agriculture until she and James Edgar were married. The family moved to Guntersville, Al in 1958 when her husband started working at Redstone Arsenal. She worked for several years at the Marshall County Health Department. She loved cooking and reading. She and James also loved to camp and they traveled in their motorhome whenever they could. She and her husband were married for 65 years. He passed away in 2010. Her home for the past 14 years has been at Merrill Gardens (Brookdale) in Albertville where she had many friends.

In lieu of flowers donations may be made to Hospice of Marshall County or Charity of Choice.

To order memorial trees or send flowers to the family in memory of Frances Edgar, please visit our flower store.