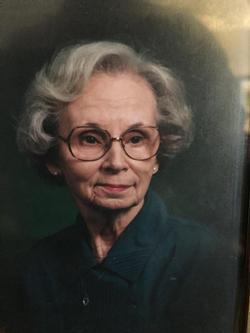 Mrs. Eugenia Kendrick Bibb McIntosh, 98, of Guntersville formerly of Boaz, died Monday, January 9, 2017 at Marshall Manor surrounded by her family. Graveside service will be at Two thirty p.m. Wednesday, January 11, 2017 at Crestview Cemetery, Guntersville with Bro. Bill Millican officiating, Eulogy given by Jane Watkins, niece of Mrs. McIntosh and music provided by Steve Downs. McRae Funeral Home, Boaz is in charge of the arrangements. There will not be a visitation GG, as she was affectionately known by family, was born August 23rd, 1918 to Clessie (Bosworth) and Eugene Bentley Kendrick in Bibb County, AL. The family later moved to Birmingham where GG attended ACIPCO Elementary and Phillips High School. She married Claude W Bibb in 1937 and they moved to Guntersville AL in 1949. Claude and GG had one child, Janice Carol. Eugenia was active in Guntersville First Baptist Church, serving as President of the WMU for several years. She was also involved in area garden clubs even serving as president. Mr. Bibb passed away in 1966. Eugenia later married Mr. Walter McIntosh and moved to Boaz, AL, where she lived until moving to Marshall Manor for her final years.

In lieu of flowers the family requests donations be made to St. Jude Children's Research Hospital or charity of your choice.

To order memorial trees or send flowers to the family in memory of Eugenia McIntosh, please visit our flower store.