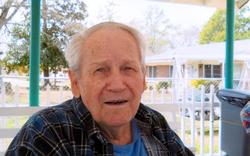 Funeral service will be Friday, March 21, 2014, at 2:00 p.m. at McRae Chapel, with Bro. Charles Dixon and Bro. Kerry Bryant officiating, interment to follow in Aurora Cemetery. McRae Funeral Home of Boaz, Alabama is in charge of the arrangements. Visitation will be Thursday evening from 6 - 8 at the funeral home.

Mr. Holmes was born in Alabama on April 9, 1927 to Albert & Nettie Gunter Holmes. He was retired from a wrought iron furniture manufacturer and a member of the Fairview FCM Church.

The family extends special thanks to the Nurses and Staff of the Altoona Rehab and Nursing home.

To order memorial trees or send flowers to the family in memory of Eldridge Holmes, please visit our flower store.