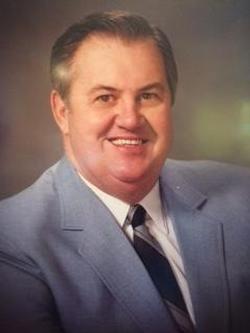 Service will be Thursday, March 19, 2015, 5 o'clock p.m. at Sardis Baptist Church with a Graveside service in the Chidester Cemetery near Camden, Arkansas on Saturday, March 21, 2015 at 11:00 a.m. Bro. Mike Goforth will be officiating. McRae Funeral Home is in charge of the arrangements. Visitation will be Thursday from 3 p.m. until service time at the church.

Dale Rowe was born in Chidester, AR on December 12, 1931. He graduated from Chidester School playing on the state championship basketball team. Mr. Rowe went to work for International Paper in Camden, AR and he played triple A baseball in the minor leagues. International Paper owned the team at that time. Mr. Rowe worked in the paper mill during the week and would play baseball on the weekends. Hoping to become a major league player, his career was cut short by a knee injury. Advancing to a sales job with International Paper, Mr. Rowe was transferred to Des Moines, Iowa where he took up golf. Being an athletic person, Mr. Rowe excelled at golf and became Iowa State Champion. Mr. Rowe wanted to continue into professional golf, but had 3 children by then and realized he could not support his family. In the 1950's, the winning purses were very low at that time. Mr. Rowe then took the Manager's job with Consolidated Blenders, based out of Nebraska, which had a plant in Guntersville, AL. Wanting to come back south so badly, Mr. Rowe took the job not even knowing the salary he would receive. After several years managing Consolidated Blenders, Mr. Rowe became saved in Christ and started a wholesale feed ingredient distribution company in Guntersville which he appropriately named Faithway Feed Company; the "way of faith". Mr. Rowe dedicated his company to Christ and was very successful.

Dale Rowe was a member of Bellevue Baptist Church in Gadsden, AL for many years. He was a deacon, Sunday School Superintendent, choir member and Sunday School teacher. Later in life, he moved to Sardis City and in December of 2002, joined Sardis Baptist Church. Mr. Rowe was one of the founding board members of Home Bank of Guntersville, which is now Bancorp South. On an interesting note, Mr. Rowe was an avid collector. Mr. Rowe has the world's largest ashtray collection and also one of the largest collections of Camark Pottery. Mr. Rowe was very proud of his collections. After his retirement, he enjoyed directing traffic at his daughter's dance studio, Studio B, because of the interaction with people. He was loved by all the students and he loved them. Mr. Rowe was known as "the big man" in Guntersville and he loved that title. He will be missed by his family and friends very much.

To order memorial trees or send flowers to the family in memory of Dale Rowe, please visit our flower store.