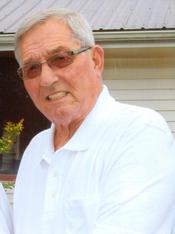 Mr. Charles Edwin Turk, age 78, of Maple St., Sardis City, passed away on Saturday, June 22, 2013 at his residence due to complications arising from brain cancer.

Services will be held on Tuesday, June 25, 2013 at 11 a.m. at McRae Chapel Bro. Mike Goforth and Bro. Alan Hallmark officiating with interment to follow in the Sardis Baptist Church Cemetery. Visitation will be Monday from 6-8 p.m. at McRae Funeral Home. McRae Funeral Home, Boaz, Alabama in charge of arrangements.

Mr. Turk was born on April 15, 1935 to Harry & Edna Turk in Boaz. He attended Boaz High School, Snead State Junior College and served honorably in the US Army from 1956-59 primarily stationed in Ulm, Germany. Upon returning home, he met and married his wife of 53 years, Gail Noojin Turk of Gadsden on November 21, 1959. The couple started their family in Gadsden and later moved to Sardis City in 1968 where he became involved as a volunteer fireman and policeman, Water Board member, and held various officer positions in multiple athletic organizations, and was a member of Sardis Baptist Church. Throughout the years he provided for education and nurturing of his family as a millwright in the steel mill in Gadsden. He retired after 42 years of dedicated employment in 2000. He was a fixture supporting and coaching local youth sports and enjoyed hunting, Alabama Football and spending time with his family. As he did throughout his life, he managed to display bravery, love, spirituality and a continuous concern for his family, friends, and caretakers during his courageous battle with cancer.

Pallbearers will be: David Byrd, Bob Heard, Jack Baswell, Bobby Wright, Thomas Shields and John Davis. Honorary Pallbearers will be: R.L. Parris and Tommy Batson. . He was the ultimate husband, father and friend. His example is a sermon to all that follow his steps.

To order memorial trees or send flowers to the family in memory of Charles Turk, please visit our flower store.