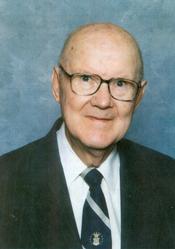 Andrew Leon Hudgins was a soft-spoken man whose generous heart and reticent nature grew out of a wide-ranging intellect and a deep and lifelong study of the Bible. His 89 years took him from a cotton-mill village in Griffin, Georgia, to every state in the union as well as countries across Europe and Asia before he went home to be with the Lord on June 30, 2012.

He played on the 1937 undefeated Spalding County High School football team that won a Georgia state championship. After graduation, he enrolled in Georgia Southern and intended to play football before the attack on Pearl Harbor. Following the attack he volunteered for service during WW II and served as an Ensign in the Navy. During the war, he received a congressional appointment to the United States Military Academy at West Point. After graduating in 1947, he joined the Air Force and retired as a Lieutenant Colonel in 1973.

Along with several service awards throughout his military career he received the Bronze Star during the second of his two tours in Vietnam. After retiring from active duty in Montgomery, Alabama, he held managerial positions in private industry and state government before moving to Albertville, Alabama to enjoy his grandchildren.

Visitation will be Thursday, July 5 from 5:00 until 6:30 p.m. with a service to follow at McRae Funeral Home in Boaz, Reverend Charles Woods will officiate. A graveside service led by Reverend Julie Hudgins Carmean will be held at Oak Hill Cemetery in Griffin, Georgia, Friday, July 6.

In lieu of flowers donations can be made to the Albertville Public Library.

To order memorial trees or send flowers to the family in memory of Andrew Hudgins, please visit our flower store.