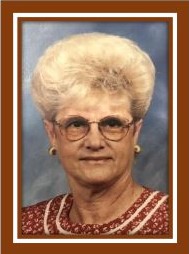 Verily I say unto you, Wheresoever this gospel shall be preached in the whole world, there shall also this, that this woman hath done, be told for a memorial of her. Matthew 26:13

Service will be held on Thursday, January 6, 2022, at eleven o’clock a.m. at the McRae Chapel. Interment will follow in the Asbury Cemetery. Visitation will be on Wednesday evening from 6 pm until 8 pm at the funeral home.

Mrs. York was born in Alabama on April 6, 1936, to Andy Culbert “Cub” and Bertha Harris Terrell. She was the oldest of three children. She began her schooling in a small school room in Asbury, and later graduated from Albertville High School. She immediately pursued a degree in Education from Snead Community College and Jacksonville State University. She went on to complete a Masters program in Religious Studies at Covington Theological Seminary, and received a Doctorate of Religious Education from Bethany Theological Seminary.

Jean met her husband, Hershel Jay York, at DAR high school at after school activities. They fell in love and were married on March 3, 1958 and moved to Germany where Hershel was stationed during his service in the United States Army.

Jean lived a full and energetic life. She had the love of her family, her friends, her church and her community. She was a minister’s wife, a Christian educator dedicated to sharing her love for Christ with young people, an active member of the church volunteering as a Sunday school teacher, a children’s church minister, a church bus captain, as well as being a summer camp counselor/chaperone. She was a member of Second Baptist Church in Boaz, and Beth Haven Baptist Church in Crossville.

Jean enjoyed working with flowers, spending time at flea markets, trade day, auctions, yard sales, riding motorcycles, camp outings, skate parties, Basketball games, and especially attending the ACE State and National Convention. She has been recognized and honored for her many accomplishments throughout her life, but being awarded as the Outstanding Teacher by the State of Alabama and the Accelerated Christian Education System in 1980 was a crowning achievement to her.

To order memorial trees or send flowers to the family in memory of Jean York, please visit our flower store.